M is for Mouse — alternatively known as A bis Z or Der kleine Rabe Socke: Buchstabensuche — is a children’s game in which players want to rid themselves of cards in hand. Each card features two letters on it as well as two images familiar to children.

On a turn, a player covers a card on the table with a card from their hand, matching one of the letters on the covered card with an image on the card they played or vice versa. Thus, you could play a card with an A on top of a card showing an apple, or you could play an apple on an A. 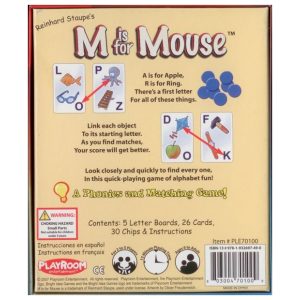 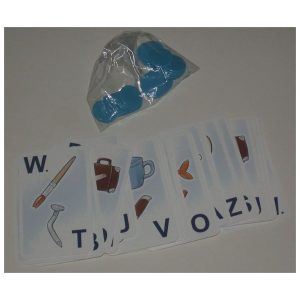 After playing, you cover this letter on the central letter board to show that no one else can use this letter for the remainder of the round.

If you can’t play, you must pass.

Whoever plays last will have hand size that’s one card smaller at the start of the next round, and whoever manages to reduce their hand size to zero wins.