Learning to read and write is easy with these 40 special tactile cards: children can pronounce the words, match the first letters of the words to the pictures, and then trace the sand-papered letters with their finger.

The activities suggested below are inspired by the Maria Montessori method, promoting learning the alphabet using the senses. Through pictures and letters (sight), sounds pronounced aloud (hearing), frosted ink letters (touch) and a reinterpretation of the “three-period lesson”, children develop phonemic consciousness and hone their ability to combine sounds and letters, which are key to learning to read and write.

The initial word sounds Flashcards Montessori Tactile and Phonics Alphabet1Begin with the flashcards of words starting with the red vowels (short vowel sounds). Show the image side to the children and say the name of the object out loud: “apple; egg; insect; octopus; umbrella”. Stress and prolong the rst letter, pronouncing the words like this: “apple, egg” and so on. 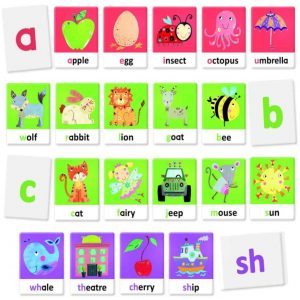 After saying each word, ask the children to repeat it, to make them aware of the sound and its position in the mouth. Repeat the names of the objects several times and invite the children to do the same.

Repeat the same game with the words starting with consonants (green) followed by those with secondary initial sounds (pink), digraphs (purple) and blended sounds (orange).